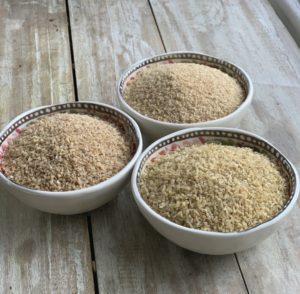 While all whole grains are superstars, many pack unique characteristics and health benefits not found in other grains. Here are the nine that truly shine.

Most often seen as the key ingredient of the Middle Eastern staple tabbouleh, bulgur is a type of wheat that needs only a few minutes to cook. It also contains the most fiber out of any grain. Buy Bulgur Wheat here

Often categorized as a vegetable, corn is actually a grain. While it may attract skepticism because of its use in unhealthy products such as high fructose corn syrup, corn in its purest form is packed with antioxidants. Look for it in an assortment of colors—yellow, white, blue, and even purple—and eat it straight from the cob or toast the kernels for popcorn.

From old-fashioned to steel-cut, oats are a staple breakfast food that are guaranteed to be whole grain even if they are quick-cooking. While all grains are high in fiber, oatmeal contains a special variety called beta-glucan that’s especially powerful in lowering cholesterol.

This light-brown colored, medium-sized ancient grain is a type of wheat and is similar in appearance, texture, and taste to wheat berries. Restaurant chefs especially prize farro for its delightfully chewy texture and sweet taste.

Don’t let the small size fool you—this gluten-free ancient grain packs massive health perks. Teff, a type of millet, has significantly more calcium and iron than other grains. Its small size makes it ideal for baking into energy bars and breads such as injera, a spongy flatbread popular indigenous to Ethiopia.

Largely grown in the United States for livestock feed, sorghum has recently been embraced for its versatility by the gluten-free community. Cooked sorghum has a chewy texture similar to Israeli couscous, while popped sorghum is a pint-sized version of popcorn. Sorghum flour is also commonly used in gluten-free baking.

Quick-cooking, gluten-free, and available in a range of colors from white to red, quinoa is a protein powerhouse. This ancient grain is a complete protein, meaning it contains all nine essential amino acids. Quinoa is also popular for its mild flavor, subtle chewiness, and versatility.

Don’t be mislead by the name—buckwheat is actually gluten-free and closely related to sorrel and rhubarb. However, its seeds are carbohydrate-rich and lend themselves to the same uses as wheat. Use buckwheat flour as a base for pancake and waffle mixes or whole buckwheat for salads or soups.