Here’s a twist on Succotash that is right up my alley.  I omitted the lima beans and added bulgur wheat which is an especially good source of manganese, magnesium, iron and fiber.  You can buy bulgur wheat here.

*If you’re looking for a some spice, add a finely diced jalapeño or two. 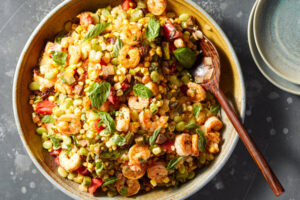 Heat oven to 425 degrees. Meanwhile, bring 3 cups water to a boil in a medium saucepan. Once boiling, add the bulgur wheat and return to a boil. Cover, turn off the heat and let soak until the bulgur has absorbed most of the water, about 8 minutes. Remove from heat, strain, and sprinkle with 1/4 teaspoon kosher salt. Set aside.

While the bulgur is cooking, prepare the okra: Spread the okra in an even layer on a lined baking sheet. Drizzle with 1 teaspoon olive oil, and sprinkle with 1/4 teaspoon kosher salt. Roast the okra for 16 to 18 minutes. Remove from the oven and set aside.

Heat a large cast-iron skillet over medium. Add the Andouille sausage and cook until it’s crisp and the fat has rendered. Remove the sausage with a slotted spoon and set aside.

Add the onion, bell pepper and garlic to the rendered fat in the skillet, and cook until the vegetables are softened, about 5 minutes.

As vegetables cook, pat the shrimp dry with paper towels, then generously season with 1/2 teaspoon salt and 1/4 teaspoon black pepper.

In a separate large (12-inch) skillet, heat the remaining 1 tablespoon of olive oil over medium-high. Once the oil is shimmering, add the shrimp in a single layer. Cook for 2 minutes, then flip and cook for another 2 to 3 minutes, until pink and cooked through. Stir the cooked shrimp into the succotash.

Add the fresh basil and stir. Taste, and adjust seasoning as needed. Turn off heat and let sit uncovered for about 5 minutes to let the flavors meld. Serve warm.