I love this salad topped with grilled shrimp, but it’s also excellent topped with simple grilled chicken, salmon or tofu kebabs. It can be made up to a day ahead (a couple of days if you hold off adding the tomatoes and cucumbers until just before you serve it). You can find bulgur wheat here on Amazon 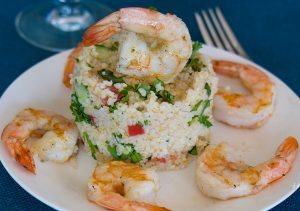 In a medium nonstick saucepan, bring the water to a boil. Add the bulgur. Reduce the heat and simmer, covered, for about 15 minutes or until the water has been absorbed. Allow the bulgur to cool to room temperature.

Preheat a grill to high. Toss the shrimp with the 1 teaspoon of olive oil and the seasoning.

In a large salad bowl, make the tabbouleh by combining the parsley, tomatoes, cucumbers, remaining olive oil, mint, lemon juice, salt and pepper. Stir in the cooled bulgur until combined.

Divide the tabbouleh evenly among four salad bowls, plates or cocktail glasses, then divide the shrimp evenly among them, arranging them on the plates. Serve immediately.

Recipe adapted from The Biggest Loser Flavors of the World Cookbook by Devin Alexander © 2011 by Universal Studios Licensing LLLP, The Biggest Loser (TM) and NBC Studios, Inc., and Reveille LLC. Find more of her recipes at devinalexander.com.